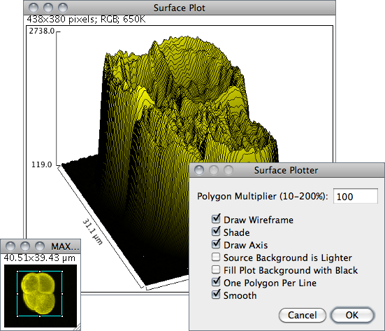 Search everywhere only in this topic. Advanced Search. Classic List Threaded. Radial profile ext to work with Macros. This post has NOT been accepted by the mailing list yet. Hi, I have very limited experience with Java and I was wondering if someone had updated the Radial profile EXT plugin to enable macros to work with it? More specifically, its the Radial profile angle plugin, which was posted in and hasn't been updated since. Many thanks for your time, Matt.

That might be a reason why you didn't get an answer for a little while. I am copying some of your original question here for the convenience of readers joining the discussion at a later point. Kota Miura.

Dear all, To say the truth the "Radial profile ext" was actually the very first plugin I had ever written under ImageJ, in what seems to me now to be almost an eternity ago. And in this times I absolutely needed such a sharp tool in order to quantify some RICM pictures in a certain way for generating a part of a publication. Also I had indeed not written the plugin for a macro I even didn't know how to program macros at this time use and the code may probably be quite improved.

So what I can propose is to look over the code in general to try to improve it, extend its capabilities for macros, look for the bug correction Kota made this bug is quite probably as well within the "Radial profile ext" plugin and then post this new plugin on a site for you guys to download and try it.

And if everybody agrees on the update we can then contact Wayne for him to update the posted code on the ImageJ website. Also I would like to ask whether the new plugin update and evaluation discussion should rather be continued within the ImageJ list or rather outside, in private, until a new updated plugin is available?

In reply to this post by Kota Miura. Dear Philippe, Kota and all, On Since recently, you can even edit the files online, making it very easy to contribute. That will also permit others devlopers but also advanced users of the plugin to contribute small changes if necessary. After all, the plugin is made for its users, so I suggest that the discussion about possible enhancements stays on this list.

That would be fantastic! Thank you :. In reply to this post by Jan Eglinger. Dear all, Following the request of macro integration of the "Radial profile ext" plugin, I tried to move forward.

Unfortunately with the data indicated in this document I'm not able to move forward for example where and how should the "Recorder. Could some examples of such implementation be found somewhere for better understanding? I thank you very much in advance.

Michael Schmid Hi Philippe, when recording, a GenericDialog records the values including checkbox settings, Choice menu settings after the user has pressed the 'OK' button. When running the macro, it fills in the values and behaves as if the user had pressed 'OK'. So it won't record pressing any other buttons, and when running the macro it won't simulate pressing any buttons.

If this is ok for you, you can add a Panel with an arbitrary number of buttons to the GenericDialog. You have to add your class as an ActionListener for all the buttons and have an actionPerformed method that detects which button was pressed and reacts accordingly.

The actionPerformed methods may modify input fields of the GenericDialog, e. With preview on, you could e. This is actually my next problem: how am I doing this? This bug does not only affect TextFields but also Checkboxes, etc.

Mac users may have noticed that the 'preview' and 'wait' of some ImageJ functions with preview is sometimes displayed incorrectly due to this bug. Enjoy Christmas time and best wishes for a good New Year! Also there is a small bug within the code I don't really know how to solve concerning the plotting of the integration area by using the "b" hotkey in opposition to the associated button.

Since by using the "b" hotkey the cone of the integration angle calculation is unwantedly drawn as by using the same code with the button it isn't drawn and thus the code behaves normally. Dear Kota, Could you please indicate me in what consist your bug correction on the original radial profile plugin? Your plugin is quite different from the original one and thus it is difficult to track your correction.

I wish you all a happy New Year !!! Since recently, you can even edit the files online,. More specifically, its the Radial profile angle. The large difference is not really a big difference. I converted the original plugin to separate plugin implementation and the core processing part to ease the use of the plugin from scripts, and also fixed a bug.

I will find time to see your code to do the same thing, and it probably then will be the merge of two works, mine and yours. It's only another 30 minutes left for this year n Japan, where I am now staying.

Dear all, Following the request a couple of months ago of macros implementation of the Radial profile ext plugin, I have submitted a version to Wayne who has updated it on the ImageJ website. It also and especially introduces several new functionalities which are the results of some fruitful back and forth discussions with Michael Schmid which lasted over several days and from which I learned really a lot.

Thus I would like to specially thank him here.

Thus enjoy and feel free to contact me again about this plugin or other purposes. Dear Philippe, Thanks for the update to radial-profile-ext.

I came across your earlier version several years ago, but was unable to employ it as desired due to the lack of macro compatibility. I have tested the new version in a few basic macros and it is great.

Any suggestions here? What I am trying to develop is a macro that will take a list of co-ordinates and measure the radial profile at each given point outputting the data to a single updated results file. Cheers, James. Dear James, I'm happy that you like the work that has been implemented in the new version of the radial-profile-ext plugin. In the case you validate this version I will then ask Wayne to make a new update on the ImageJ Website.

Re: Radial profile ext to work with Macros

Hi again, I guess by having "the option to output the plot as intensity vs time rather than an individual plot at each time point" you probably wanted something similar to what can now be done with the following macro, isn't it? In reply to this post by JimmiB. Dear Phillipe, Thankyou for your help and prompt response. I am in the process of testing the new update and will get back to you ASAP.

This looks good. How do i get this to plot, or add the other radius.

Apologies, I have no experience with the Ext. Ok good Getting the data in a result table or plot is not very different in terms of use of the "Ext. Do you want to know what the values of "Ext. Any ideas? Maybe Carl's extended version could be merged at some point. In reply to this post by Jan Eglinger Dear all, Following the request of macro integration of the "Radial profile ext" plugin, I tried to move forward.

In reply to this post by Jan Eglinger Dear all, Following the request a couple of months ago of macros implementation of the Radial profile ext plugin, I have submitted a version to Wayne who has updated it on the ImageJ website. Free forum by Nabble. Edit this page.