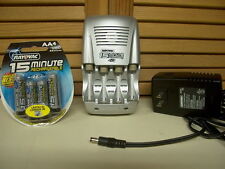 Thus, a few questions for the 'old-timers' with PS3s: Were there multiple versions? Mine doesn't. What does it terminate on?

I don't see any metal contacts for Max Temp.

I've seen a few posts indicating pre-mature termination for D cells. If so, how long?

At mA, I won't use it any more for any AAs, since it's above 0. Any problem, besides the higher current, in doing this? Reply With Quote.

Oh well, 0. It appears to terminate on -DeltaV. 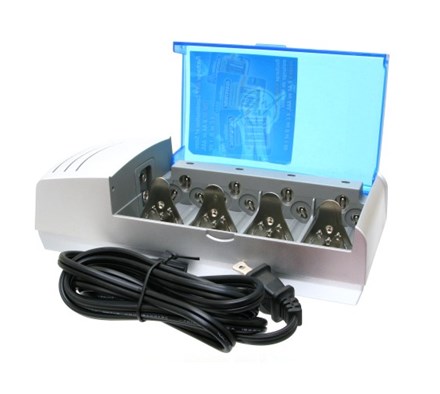 My 'crappy' AAs don't. Although it's designed for two AAAs or AAs in parallel per channel, it appears to work fine with only one cell per channel. Haven't tried any AAAs yet.

Does anyone have the specifications? If you are talking about the ones that charged the renewal batteries, I still got one. Used it yesterday on some old rayovac nimh mAh aa cells.

IT missed termination on one cell. I moved it to another slot and it missed again. It seamed to do that alot all the time even with renewal batteries. I never treated it well. Lots of leaked alkaline junk in it. It cooked lots of cells. I had a ps4 as well, it was the only one that survived because I stopped using it after a year when I thought my batteries were going bad then found out it was the charger that was at fault. I'm interested in the older version of this charger as well since I have one.

I'm considering buying a new charger because I don't know what this one is doing and don't want to unnecessarily abuse new LSD batteries that I'm going to start accumulating. If this one will reliably charge and stop charging these types of cells, I'd just stick with it, it just seems like on my standard mAH NiMH cells it's running all the way into the timer limit before the LED goes out on them. But I have seen at least one LED go out before the others so it gives me some confidence that it's doing something cell-specific.

Or is it just missing the termination completely and hitting the timer shut off? Also, more on-topic, there does seem to be several chargers that Rayovac called the PS3. I'll take a picture of mine and upload it. I'm not sure how old it is, but several years for sure.

It does not to 9V and is the black brick-like one. Originally Posted by jhellwig. I moved it to another slot and it missed again It seamed to do that alot all the time even with renewal batteries I used to charge aa's parallel and kept batteries paired at all times. As my rechargeable collection diminished I started charging one cell per slot. I duno why I did. Just thought it was something to do or utilize the whole charger. TakeTheActive Thanks. That pretty much answers my questions about the charger.

I'll look for something else and in the meantime set a timer of my own on the PS3 to pull cells somewhere before they're overdone. I should probably find a relevant thread, but I'm going to ask here anyway Do people who have these and love them typically only charge 2 AA cells at a time? Do newer chargers with about a. Originally Posted by TakeTheActive. Not in my experience based on HEAT, not current readings.

Back up timer is supposed to terminate 12 hours. I will stick to my Charge Manager!

Set a man on fire, and he'll be warm for the rest of his life. I just pulled a couple of the Rayovac PS3s off the dust collector shelf -- one sliver plastic with a blue translucent plastic cover and 9v terminals , the other black plastic, red logo and white letters "3 in 1" no 9v -- spec on the back is identical, output "2V DC ma X4" I've got some Ebay NiMH D cells coming in, wondering if I should junk these or if they're usable; I'll look at TTA's linked collection of manuals and specs.

Curious if anyone else has found these old chargers useful at all, and if so how you're doing it. I've got a cheap multimeter and can check with that, if I know what to look for.

Will be doing my homework. I still have a Rayovac PS3 dark grey, transparent lid, no red logo or white letters that is still in service, and has been since I bought it years back. It's never cooked cells; but I've always left the lid open for additional cooling while charging.

But I've had no way to do any qualitative analysis or determine how good a job it does. At the time, it was supposed to allow mixed battery types between those channels, and supported rechargeable Alkaline, NiCd, and NiHm cells.

Charging times seem to be proportionate to the respective capacities. Seems strange, though. Update: I just found the manual for the Rayovac PS3 charger. Originally Posted by Tinkerer I picked one up and it does overcharge the cells.

I suspect it watches the cell voltage to level off for some time before it decides to terminate. Just feeling the cell temperature by hand has the temperature maxing out and staying there for a couple if hours before it terminates. This is painfully evident on cells that only need to be topped up as it heats up the cells and takes two hours to terminate. It's the Platinum version which is silver with blue cover.

I suspect why they didn't use neg. Yes, even my new charger had rechargable alkaline stated in the manual and on the back of the charger too.

It simplifies the charge ic and it probably won't be caught by most consumers. So it really is an Alkaline charger with a NiMh cooker as a bonus. The only benefit I can think of is when charging full capacity D cells is that the overcharge will be much smaller compared to the large capacity of the cells. Regular neg. Yeah, I hung onto PS3s that I'll only use with old Tenergy D NiMH cells for sale cheap everywhere last year -- light blue wrapper, lower case "e" printed on it, either old stock or heat-damaged.

All times are GMT The time now is PM. All rights reserved. Image resizer by SevenSkins.